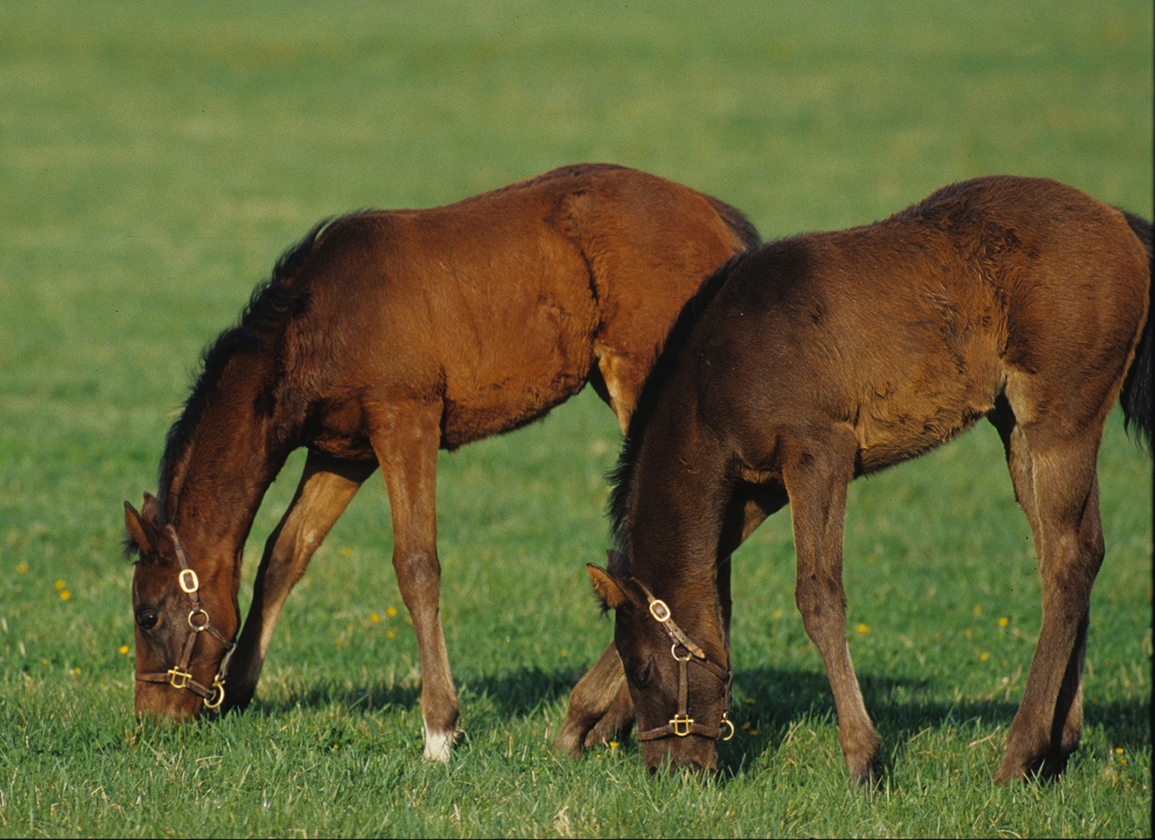 Sporadically, I have had trainers, owners and random onlookers approach me while I’m working on a horse with a remark that the horse’s feet (specifically the front) ‘sort of look different.’ This normally only occurs when I find myself working on horses with extreme examples of mismatched feet, where one foot presents a longer-looking toe with a low or no heel, and the other, a shorter toe with a higher heel. My normal response usually includes a look (of disgust); however, their observations would be (somewhat) correct (on the surface), but–with the quick retrieval of my calipers–disproven with a measurement indicating the toe length, both right and left, are the same. (Yes, I ALWAYS check). The reaction is invariably a collective response of, ‘huh, interesting,’ which is usually followed by, ‘so, why is that?’

Like humans, left-handed or right, horses favor one leg versus the other, with related studies approximating 75-80% of horses are right forelimb dominant. Forelimb dominance and how a horse supports itself are all factors with implications on hoof symmetry and morphology. If you observe a horse eating in a stall or grazing in the field, one foot is always pointed out in front of the other. This position is commonly referred to as the grazing stance, with the preferred foot varying among horses but likely remaining the same throughout a horse’s life. I am not aware of any examples of ambidextrous horses or one’s ability to change a horse’s preference, however, we must consider that a horse normally grazes, whether in the field or stall, for approximately 22 hours a day and that reality has some consequences and effects on the hoof’s morphology.

Using an example of a horse that points the left foot, leaving the right back, we then must start to ponder the other factors which may further affect the horse’s ability to comfortably graze, such as the neck, poll, shoulders and their additional effects on the hoof, its confirmation and presentation. Typically, horses with extremes in conformation (head, poll, neck) will likely produce some level of inability to comfortably graze. Typically, this results in great visual differences in the feet and this will also include similar effects on the diagonal pair of the hind feet (i.e.: left front, right hind). Continuing to consider the above grazing stance preference, the right hind tends to be a slightly ‘longer’ toe with a ‘lower’ heel. However, achieving equilibrium in the hind feet tends to be easier due to the decreased amount of weight bearing. Many old timers, especially those in the Standardbred world, often say you can do a lot more to the hinds attempting to correct things than you can to the fronts with a decreased potential for soreness or lameness. That has also been my experience.

So, what then occurs when bearing in mind the grazing stance and effects on hoof presentation?

Continuing to use our example, characteristically, the left foot is always (visually) the ‘longer’ toe with a lower heel; this reality has varying degrees of extremes which are again dependent upon the horse’s ability or inability to comfortably graze. With the force and pressure of the horse’s weight leaning on the left heel, most experts agree, the foot grows away from pressure. Theoretically, this pressure impacts heel growth, likely impeding blood flow, which in turn impacts the foot’s ability to grow ‘up,’ prompting interventions to change or correct the foot’s presentation and alignment. These realities, if left unaddressed, probably will have greater consequences on soundness and biomechanics, including the potential for possible injury to soft tissue (DDFT and suspensory).

Radiographic image of club foot and toe’s dish. The arrows highlight the dish and the changing relationship of outer wall and coffin bone. Breakover is highlighted with the red arrow beneath the shoe and the yellow arrow indicates arguably where the foot ‘wants’ to breakover. Additionally, the blue arrows emphasize the farrier’s likely need to trim the heel in an effort to correctly align the bony column and reduce possible strain on soft tissue aspects of the forelimb affected. The successful farrier is always forced to balance the possible limitations of the foot’s presentation for trimming and shoe application. | Jude R. Florio

Conversely, the foot that remains back usually presents a more upright appearance, the result of greater pressure being placed in the toe with pressure alleviated in the heel. Again, the extent or severity of that appearance varies and can be quantified with hoof angle measurements. As an example, Arabians (in my experience), always tend to have one club foot, the probable result of the breed tendency to have an upright head and high neck set, creating the need for the affected animal to contort itself to comfortably graze. Differently than the pointed foot, the back foot heel growth is dependent upon how much pressure is put in the toe. Having witnessed some extreme examples of the back foot being ‘tipped’ forward on the toe, this includes possibilities of the toe “dishing,” this visible change normally occurring when the relationship of the toe of the outer wall deviates from the position of the pedal bone and the toe extends past the breakover. All of these factors will dictate how each foot should be trimmed and how shoes should be applied.

Moreover, the realities of handling, exercise, training and veterinary/chiropractic treatment cannot be discounted when seeking balance and equilibrium. The types of exercise and training will also have direct effects on the foot’s confirmation and presentation, evident in noticeable observations of shoe wear or the way a horse goes, where adjustments are possible.

I recently discovered that my iPhone has a slow-motion video option. (I know; welcome to the 22nd century, but I’m in a 2,000- to 3,000-year-old industry. I’m told the second oldest.) This slow-motion option has been great to detect gait anomalies, loading, unloading, landing and take-off. I highly recommend its use at the lower speed gaits as a tool to detect potential issues, which one can extrapolate may be exaggerated at higher speeds.

So, what is the farrier’s role in all of this?

A farrier/podiatrist has a lot to consider when addressing these issues and their level of experience will dictate how much they do or how far they go. When I consider these differences, I always work from the space of the bony column’s alignment and what I can do to improve it when necessary and within reason. There are some occasions where a horse will grow enough toe that can be trimmed down on the low, pointing foot, which may include pulling the foot forward and trimming the toe back. In extreme examples, sometimes there is not enough foot to be taken down and doing so may result in soreness. I have never experienced a horse being sore by taking the toe back. Subsequent to static balance, dynamics is key and setting the shoe back aims to decrease the duration of breakover, a result of the caudal shift of the fulcrum point, commonly referred to as ‘backing the toe.’ 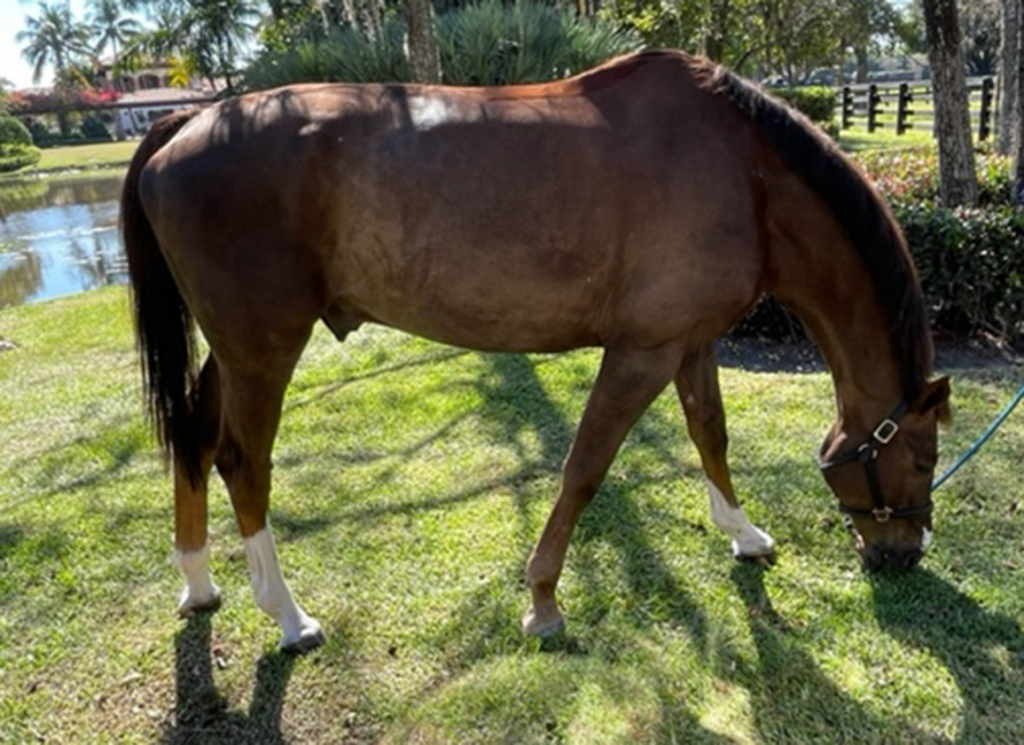 Equally, the other front foot, upright and remaining back during grazing, is addressed slightly differently. Experience will dictate how much heel can be trimmed including a measure of the horse’s comfort, frequency of shoeing and the degrees of change, with significant changes to the hoof’s angle possibly negatively affecting the soft tissue. Some horses require greater amounts of heel trim. I often use the frog as a guide in assisting in decision making: the higher heel’s frog seeking pressure (pumping mechanism, vascular function) distorts and, when trimmed, gives a greater ability for one to determine how much heel can come off. Of course, as highlighted in the article linked above, the use of radiography is an additional resource for guidance.

Having gained experience from past work on foals and younger horses, I have found positive changes are possible and realistic. Routine trimming requires minimal adjustments achieving noticeable changes and correction of differences in the feet with positive outcomes. Perhaps this is because of the foal’s or weanling/yearling’s size and the realities of initially suckling, as well as the future ease and ability to graze, which may decrease extremes and the effects on the feet. However, this will quickly change with time and growth and may include other circumstances throughout a horse’s life including injuries and their potential for effects on hoof growth.

In the end, farriers have multiple tools at their disposal which should facilitate their ability to make sound decisions when attempting to address differences. Using fixed reference points, measurements which quantify toe length and angles can all be recorded for future reference assisting in achieving the goal of static balance and equilibrium. As in all things, there are no hard and fast rules. In certain instances extreme or otherwise, achieving balance and equilibrium may not be possible, therefore requiring veterinary examination and any number of interventions (pads, frog support, etc) in the hope of alleviating potential stress, decreasing strain and pressure with the expectation of facilitating improvements, especially in performance. However, it is wholly possible with time. By including the correct interventions, positive improvements are possible as redistribution pressure and forces theoretically can improve blood flow, which likely results in healthy hoof growth.

Jude Florio, who has served as a professional farrier for over 20 years, earned a graduate diploma from the University of London’s Royal Veterinary College in Applied Equine Locomotor Research. He is among the current MSc Equine Science cohorts studying at the University of Edinburgh, Royal ‘Dick’ School of Veterinary Studies (June 2023). 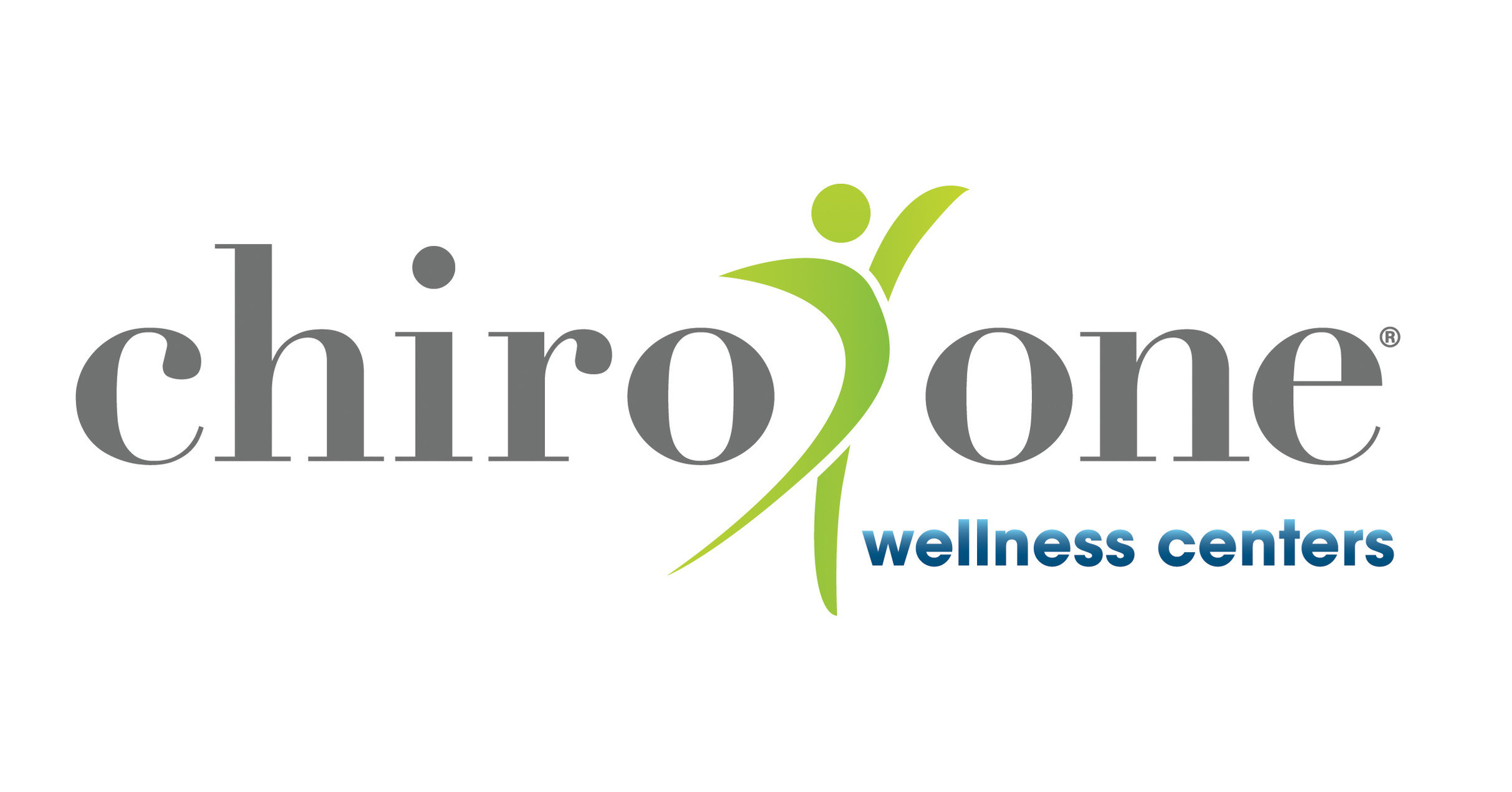 Some people think of chiropractic care as something that’s only required after accidents, injuries, or surgeries. In fact, regular visits to the chiropractor can also form an essential part of any wellness plan. Just ask the many celebrities that rely on chiropractic care to help them stay healthy and in shape. What Is Chiropractic Care?…

The Marquis Market Report is extensive in its research of the worldwide Chiropractic Tables market since it looks at market competition and provides a geographical analysis. The Marquis Market Report covers a wide range of topics, including the market’s current conditions, its projected path in the future, the impact of different forces on business…